Brea Lawrenson is Taming her “Demons” in New Single

Canadian country artist Brea Lawrenson has released some fresh new music! Her new single is called “Demons” and addresses some confidence struggles that many people face.

At the surface, “Demons” is a laid back track that’s perfect to turn up and sing along to in the car. But when you really start listening to the lyrics and hearing the song in its entirety you realize that it’s a very deep and personal song. Brea has really poured her whole heart into this song and it couldn’t have turned out better.

The song begins with a lot of statements that speak to self-doubt, and insignificance. Once the chorus comes around, and more towards the end of the song, it’s almost like Brea Lawrenson is screaming at her inner demons and telling them that they are not welcome to bring her down anymore.

This is a really relatable song that can anyone can see a bit of a reflection of themselves in. Both men and women often feel like this and it’s really important for artists like Brea to raise awareness of this through their art, and give people an outlet to relate to. There’s something therapeutic about this single. Just read the lyrics, and see for yourself. 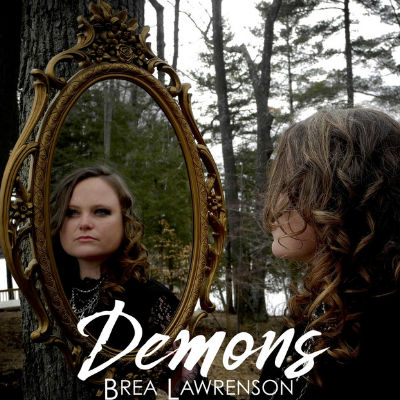 Listen to, and download “Demons” by Brea Lawrenson to experience it for yourselves.

Brea Lawrenson is a Canadian country artist from the Ottawa Valley. She has been writing music for quite some time, and has been really active in the Ottawa music scene. In recent years, she has been seeing some great success within Ottawa, and across Ontario. Much of this success is due to (not only her great talent) support from the radio community. She has even been hosting the afternoon drive with Nan on Country 101.1 on a weekly basis, which is sure to increase her fanbase.

We’re excited to see where Brea is headed as we approach festival season. She always puts on a great show! Keep your eyes out for her performance dates, we’ll keep ya updated.