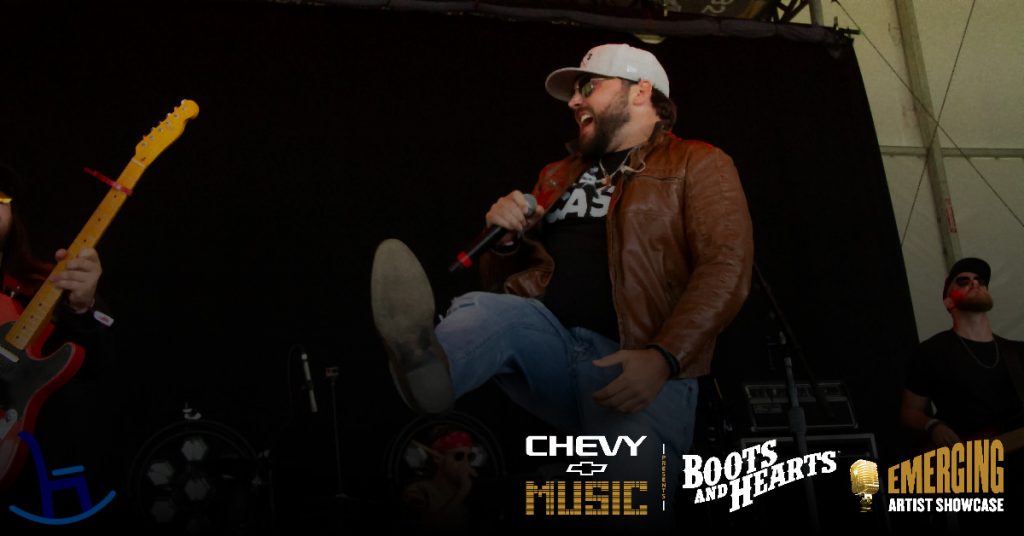 Canada’s latest emerging artist has officially been crowned! Canadian country artist David Boyd Janes was one of the competitors at the popular Emerging Artist Showcase at this year’s Boots & Hearts Music Festival, and was awarded the title of the official emerging artist.

On Thursday August 8th, 2019, David Boyd Janes was one of the 8 competitors at this year’s showcase. He competed against 7 other incredibly talented performers: Mackenzie Leigh Meyer, Brad Saunders, Dylan Burk, Rebecca Rain, Amber-Jo Bowman, Justin Tyler and Brady Kenneth. Each artist had the opportunity to sing 3 songs for the crowd and a panel of judges. Every year, the talent we see at the showcase gets bigger and better. This year was no different, with every artist bringing their A-game.

At the end of the showcase, the panel of judges had the difficult task of selecting two finalists who would compete for the title of Emerging Artist on Sunday before Kane Brown’s set at the Main Stage. The two finalists were Justin Tyler and David Boyd Janes.

It came time for their performance on Sunday at the Main Stage in front of thousands of people and another panel of judges. Each performed a few songs, where David Boyd Janes was officially crowned the winner of the 2019 Chevy Music Boots & Hearts Emerging Artist Showcase.

David Boyd Janes not only gets bragging rights, and an awesome plaque to proudly showcase this title he also wins a grand prize that any independent artist would love. This prize includes: a single release with Warner Music Canada, an all expenses paid trip to Nashville for a professional writing session, a photoshoot, and the opportunity to perform at Boots & Hearts sponsored events throughout the year.

It’s a prize that we know David won’t be taking for granted. We had the opportunity to connect with him over the weekend. We have to say, we were completely blown away by this guy. He is incredibly well-spoken, thoughtful, and genuine. When we were talking to him about music, life, and the showcase, it was really hard not to feel inspired.

His story is really quite compelling. It’s filled with life’s ups and downs – the perfect recipe for a country star. “I’ve been doing music my entire life,” Janes tells us. “I started really young. I started a rock band when I was 15 called Running Against Radar. We won a contest called Emergenza and we were flown over to Germany to open for The Darkness in front of about 40,000 people. When we got there,” he continues, “the guys decided it was better idea to party than to get ready for the show. So, we didn’t put on our best performance and that really broke my heart, and I got embarrassed. So I decided in that moment to turn my back on music for almost 10 years”.

From there he explains to us that he ended up landing a great job in sales and was doing quite well for himself. But the corporate success left him feeling empty. When he was at his lowest, he did what every artist does. He picked up his guitar and started to write. This is when he wrote “Letting You Go”, which is on his EP.

He still wasn’t quite ready to jump back into music. But he did start going to karaoke bars and performing for crowds in this way. After a series of events, he decided to quit his job, sell his house, and pursue music again.

I said to myself – Just have fun and calm down!

Since deciding to return to music, David Boyd Janes has been having a lot of success winning contest after contest. Which led him to the Emerging Artist Showcase. We asked him what was going through his mind when he was about to step out on the stage. “I’m not embarrassed to admit this,” he said, “I don’t get nervous ever, and I walked out to my intro and, I kid you not, my hand came up to grab the microphone and I literally watched my hand shaking. I think I was so excited, and so nervous, and so many different things, that I didn’t even realize I was nervous.” He goes on to say, “when I went to grab the mic I thought to myself, ‘you need to calm down right now. This is your dream!’ Just walking out there and seeing all these people that want to hear your music – you don’t get that all the time as an indy artist. It was so cool. So I said to myself ‘just have fun and calm down'”.

His advice to himself clearly worked.

The next 12 months are going to be a wild ride for David Boyd Janes. He’s going to be headed to Nashville to write some songs, record some music, releasing a single through Warner music, and having the time of his life. We can’t wait to follow alongside David as he grows in his career, and see what the next 12 months and beyond have in store for this incredible Canadian country artist.

The Nominations For The 2021 CCMA Awards Presented By TD
Front Porch September 22, 2021