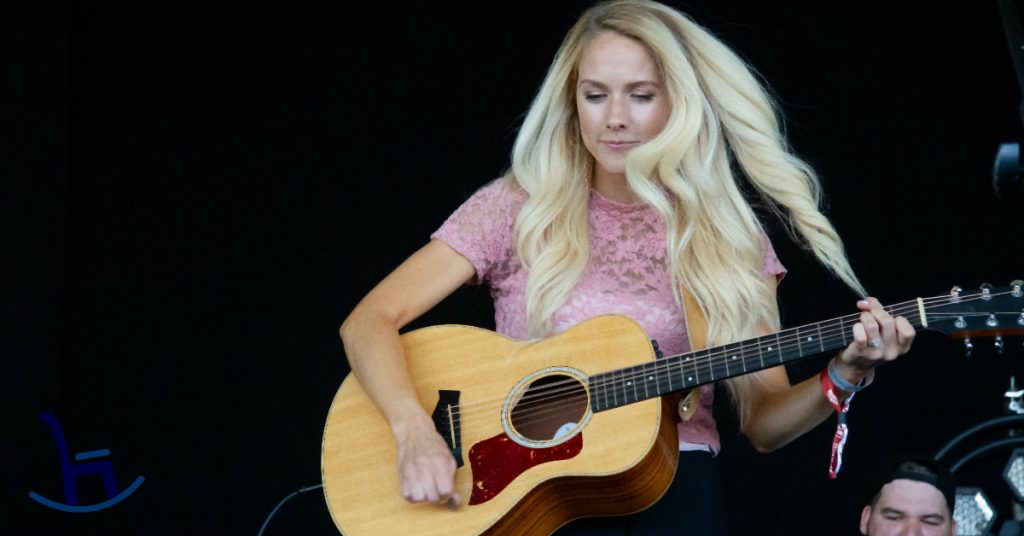 Earlier this Summer, we had the chance to catch up with Canadian country artist Amber-Jo Bowman. She was one of the talented artists who competed at the 2019 Boots & Hearts Emerging Artist Showcase, presented by Chevy Music.  She had a really great set, that got the crowd ready for a perfect weekend!

When speaking about that feeling a few minutes before stepping onto the stage, Amber-Jo told us: “I was so nervous!” She continues, “But I knew that once I got out there I would have so much fun – and I really did. I was just hoping I would remember the lyrics to my songs,” she says through a laugh, “and I just wanted to soak in the moment right before [going on stage].”

Getting up on that stage in front of a big crowd can be extremely overwhelming. But that didn’t stop Amber-Jo from having a great time. When she first hit the stage, she looked out into the crowd, took a nervous breath, and then got right into it. It helped that some of her family and friends were in the crowd which helped ease her nerves. “It was amazing – a ton of my family and friends came out. It was a lot more comforting to see some familiar faces – It was just such a special moment.”

Most artists who are invited to take part in the Emerging Artist Showcase have applied for this program multiple times over the years. However, this was Amber-Jo’s first time ever applying to be part of the showcase, sponsored by Chevy Music. This alone should tell you how great of an artist she really is. Her music really hits you. We encourage everyone to go check her out!

Each artist had 3 songs that they could perform for the crowd. Her set started with a really interesting cover of Jason Aldean’s single “She’s Country”. You don’t often hear a woman cover this song, but it really worked! It was also a phenomenal way to kick off the showcase. Her second song was one of her original songs from her debut EP Gravity. “Sometimes I Wonder” was a great song to showcase the tender power in her voice, and her songwriting skills. It’s a really great song!

She finished out her set with another really cool cover choice. She sang “Beer Money” by Kip Moore. Her two covers provided a nice juxtaposition for her original song. She proved that she can rock it out with the best of them, but can also make you stop in your tracks with a great ballad.

She may not have been selected as the winner of the showcase, but she understands the value and exposure that this opportunity brings. A number of Canada’s top country artists got their start on the Boots & Hearts stage. “I think this is a really good opportunity for me. It just emphasizes to me to work harder at music this year.”

We are so looking forward to hearing what will be coming next for Amber-Jo Bowman.

Amber-Jo Bowman is a Canadian country artist from Stouffville, Ontario and is currently the Creative Arts Director for the Campus Church Bayview in Aurora. She started playing music when she was 11 years old. She was a shy kid who would sit in her room playing the guitar and writing songs.

Songwriting is a deep passion for Amber-Jo which brings an abundance of fulfilment, joy and purpose. Her wish is to touch the hearts of people with her lyrics and melodies, hoping they will find their own meaning and connect with the stories she tells through her music.