The concert was nothing short of the expectations set out when first announced. The Reklaws opened the show to their hometown crowd. The Cambridge sibling duo never forget to shout out their roots and tip their hats to the supportive hometown crowd. Their energy really flooded the auditorium, getting the adrenaline rushing through the crowd. They played their latest radio release Old Country Soul, along with hits Long Live the Night, Feels Like That, I Do Too and Wish You Were Beer.

Following their set, the curtains fell, and viewers waited for what whatever was happening behind it. Not sure how it was going to go, I chatted with my friend about how the stage would be shared, who would go first, who would get to close. We also wondered if Mackenzie Porter would play an opening set next.

Finally the curtails fell back and both Dean Brody and Dallas Smith took the stage to duet some of each other’s biggest hits. Dean and Dallas are both highly energetic on stage as individuals; together they infected the crowd with excitement. It was a unique experience to say the least, and I’ve been to many shows.

After a handful of duets, Dean left the stage for a solo Dallas Smith set, which featured some recent hits, and some classics. He shared his soon-to-be released to radio “Timeless,” which was released as part of the Drop EP, earlier this year. We got our first glimpse of Mackenzie Porter when they shared the stage for his Teri Clark duet, “One Drink Ago.” She then got to play her latest radio single, “These Days.”

The stage went black and we were treated to Chad Brownlee, a Canadian country favourite, who’s been quiet over the last couple years. We got to hear “Forever’s Gotta Start Somewhere” and “When the Lights Go Down.”

Dean Brody returned for his solo set, which featured hits like Country Girls, Mountain Man, Good Goodbye, Bring Down the House, Bounty, Upside Down, and his most recent, Black Sheep.

Dean closed his set with Bounty, the “Friends Bar” was set up and Dallas returned. A familiar group of fans, who’d been to 40 shows were invited to have a drink with Dean and Dallas while they played acoustic hits, at each other’s requests. Dallas asked Dean to play “Time,” and Dean followed up by requesting a Default track, “Wasting My Time.” 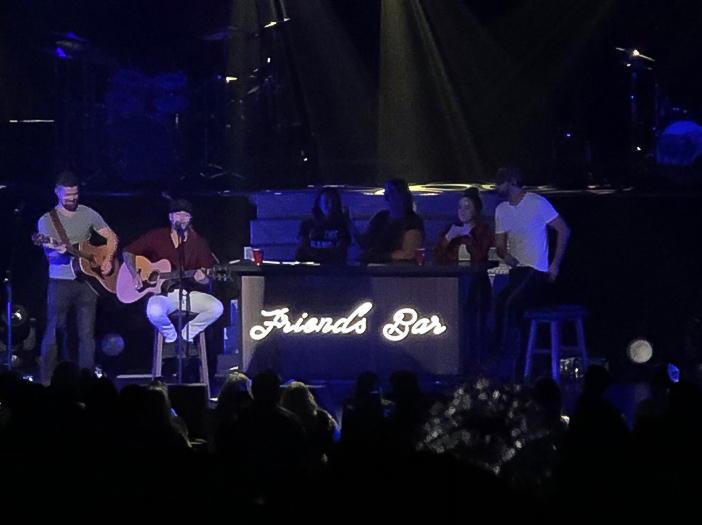 If you have the opportunity to snag some tickets last-minute for any stop on the Friends Don’t Let Friends Tour Alone tour, you won’t be disappointed!