As with a lot of art, the general opinion of Canadian music is often less than complimentary. Canadian country music is no exception. Artists are sadly not considered to have “made it” until they have seen success in the American market.
But, there are so many amazing country artists in Canada. So many in fact, we decided to put together a guide to help you discover some amazing Canadian country artists based on your favourite country superstars across the border.
Now, let’s be clear – we aren’t saying these comparisons are exactly the same, or that they are copying their American comparison. Because, they most definitely are not! They do, however, all have similar vibes, where if you like the American artist, chances are that you will enjoy the Canadian comparison. Disclaimer over.
Now let’s get into it! This is the Ultimate Starters Guide to Canadian Country Music! **Note – this post will keep being updated and expanding, so bookmark it and keep coming back.

Fans of Kelsea Ballerini should listen to Madeline Merlo

Kelsea Ballerini is relatively newer to the country music scene, but there’s no denying that she is a fierce talent! She hits that crossover country right on the head. While she hasn’t seen huge success in Canada yet, she has been killing it in the United States. Her performances are always so interesting, providing a spectacle for the eyes – Bright costumes, fun dancers, and really great music.

Fans of Kelsea Ballerini really need to check out Canadian country artist Madeline Merlo. Much like Kelsea, Madeline Merlo is always such a treat to watch perform, and her music is really fun. For example, “Motel Flamingo” and “Neon Love”, her latest singles, have performed really well on the charts, and resonated with audiences. You can’t help but move when either of those songs come on.

Listen to “Neon Love” and “Motel Flamingo” on Spotify.

If you like Eric Church, you’ll love Tim Hicks

If you’re anything like us, then you would agree that there’s nothing better than turning on some Eric Church, cracking open a beer, and lounging on the patio. Eric’s album Chief was easily one of the best albums of 2011, and the best in Church’s career to date. It received critical acclaim and was certified 3x Platinum in the US. Church’s signature country vocals, mixed with the hard-rock musical arrangements, has really set him apart from the others in the industry.

If you’re looking to find someone similar to Eric Church in Canadian country music, Tim Hicks is the first to come to mind. They definitely don’t have the same vocals, but when it comes to the country / rock vibe, they aren’t too different. Tim Hicks is from Niagara Falls (the Canadian, and better, side) and has been making a splash in the Canadian country scene since 2012 and hasn’t stopped since. If you like Eric Church, then you have to check Tim Hicks out.

Listen to “Get By” by Tim Hick on Apple Music.

If you like Miranda Lambert, you should Check out Brea Lawrenson

There’s no doubt that Miranda Lambert is a powerhouse in the world of country music. With over 50 awards, including 2 Grammy’s, it’s pretty hard to miss the impact that she has had, and continues to have, on country music. Her voice is unmistakable, her songs are so full of emotion, all paired with a perfect amount of badass-ness. She’s a fantastic artist.

If you’re a fan of Miranda (we wouldn’t believe you if you said you weren’t), and looking for a Canadian artist with a similar vibe, than you should check out Brea Lawrenson. Brea is an artist from the Ottawa area who has been independently releasing music. She’s still working her way up in the industry, but so far has released some great pieces of art that have been resonating with audiences across the country.

Her voice doesn’t necessarily sound like Miranda’s, but it does have a unique quality to it that is unmistakably ‘Brea’. Brea’s songs are so full of emotion, that we can’t help but notice some similarities in their music.

Have a listen to “Demons” by Brea Lawrenson on Spotify.

Fans of Old Dominion should listen to James Barker Band

Old Dominion is one of the hottest country groups in North America right now. Lead singer Matthew Ramsey has such a unique voice, paired with an equally unique – and yet somehow familiar – band. With the release of their debut album Meat and Candy in 2015, Old Dominion shot to top of the charts almost instantly. They emerged as one of the hottest breaking bands in country music.

The speed of their public success is what makes them so similar to Canadian band James Barker Band. Back in 2015, James Barker Band won the Emerging Artist Showcase at Boots & Hearts. Ever since, this band has been seeing some really great success. They have found a way to relate to country fans in such a genuine way that country radio couldn’t ignore. Every single one of their singles have spent time in the top 10 in Canada. Even if you don’t know the industry, you know this is really impressive.

The similarities between these two bands aren’t just in the rise of their success, but also in their sound and vibe. They have a similar sound and clearly draw from the same influences in the industry. So, if you can’t get enough of Old Dominion, you should definitely give JBB a listen.

Listen to their debut single “Lawn Chair Lazy” on Spotify. 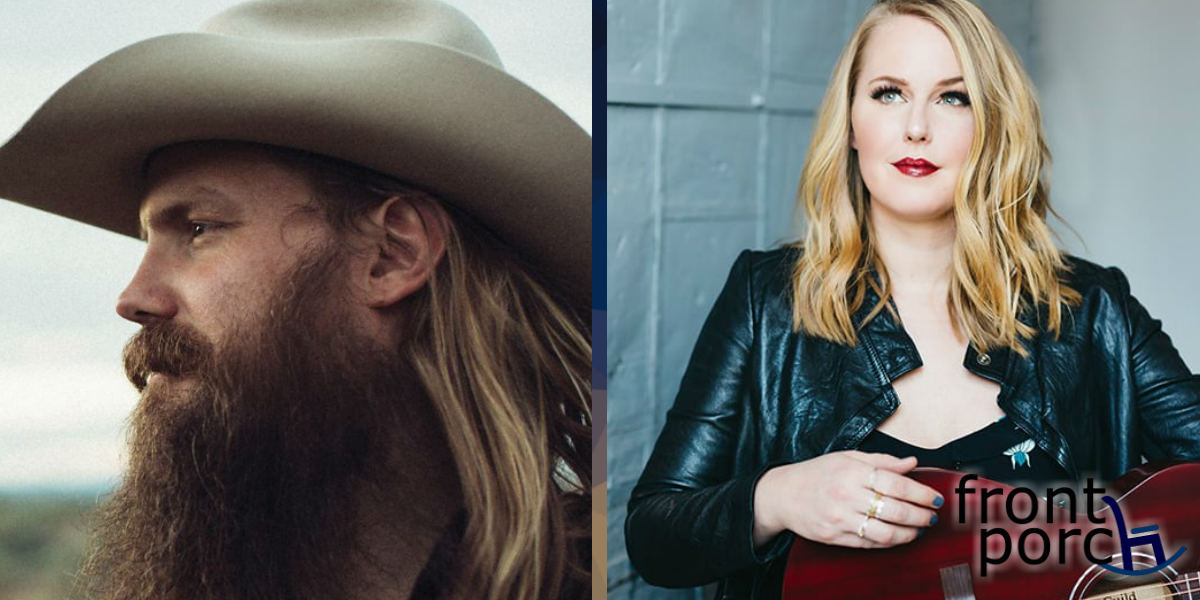 Yep. This one is a little bit of a weird comparison, we know. But let us finish! Chris Stapleton is one of most (maybe THE most) critically acclaimed artists in modern country music. He’s been a huge success behind the scenes for year, but with the (somewhat quiet) release of his debut album Traveller, he rose to public royalty. He’s won, like, a billion awards (actually, about 40) since his first album in 2015, and there’s no sign of slowing down.

His songwriting is so easy to listen to, while at the same time is able to make you feel all the emotions. It’s a true talent. That’s where we see the similarities between Christ Stapleton and Jessica Mitchell. They don’t sound anything alike, and they certainly don’t have a similar look. But their voices are both so pure, with a speck of gravel, and they pour out everything they have into each song.

Jessica Mitchell is one of Canada’s greatest musical treasures. Bold statement, we know. But when you hear her music, and watch her perform, the room goes quiet. Her lyrics captivate an audience in such a way that is so rare. Much in the same way that Chris Stapleton’s music resonates with audiences. Both artists are just special.

Listen to “Workin on Whiskey” on Spotify. But only if you have a box of kleenex ready.

Another interesting comparison here. Maren Morris has been writing music for other artists for years. She’s written for some of music’s biggest names including Tim McGraw and Kelly Clarkson to name a few. But when she wrote “My Church” she felt so strongly that she had to be the one to sing it that she insisted on recording and releasing it herself. She released it as an independent artist. The song started to take off on streaming sites, and labels started noticing. She signed with Columbia Nashville, and the rest is history.

Her voice is so sultry, the tone is so pure with just an ounce of rasp. It comes through the speakers so beautifully. Leaving Thomas is a Canadian country duo consisting of best friends Annika Odegard and Bryton Udy. As you can see, half of this duo is a dude, so he obviously doesn’t sound like Maren; however, Annika’s voice has a lot of similarities to Maren’s. It has that gravelly aspect to it, and her lower register is just to smooth, that we can’t help but recognize some similarities between the two.

We will say, Annika of Leaving Thomas has a little bit of a stronger voice than Maren, and seems to be able to control her instrument a little better during live performances. So, if you’re a fan of Marren Morris, you NEED to check out Leaving Thomas.

Give “Blame it on the Neon” a listen on Apple Music. You’ll love it!

Fans of Garth Brooks should check out Brett Kissel

Yep… this is a really bold statement to make. We know. But hear us out. We really don’t need to give you any introduction to the legendary Garth Brooks, but he’s without a doubt one of the most successful artists of all time – not just in the country music genre. He completely changed the landscape of country music, and pushed the norms of what it means to be an entertainer in the genre. To compare anybody to this super-human performer seems a little unfair. But we’re doin it!

Brett Kissel is a Canadian country artist from Alberta who is actually on a similar career path that Garth Brooks was on. Bob Doyle, the man credited with discovering Garth’s and still his manager, decided to work with Brett Kissel after meeting with him in Nashville in 2012. So it’s undeniable that Brett has talent, and is one of the biggest similarities between these two artists.

In 2013, his debut single “Started With a Song” became the most added song at Canadian country radio in its first week. There’s no denying that these two artists are very similar.

Listen to his debut single “Started With a Song”, and his latest “Anthem”.

The Reklaws Break Records With Single “What The Truck” With Sacha
Front Porch July 24, 2021

Get To Know Greg Rider And His Latest Single
Taylor Jean July 4, 2021

The Reklaws Break Records With Single “What The Truck” With Sacha

Lineup For The Road Back To Cavendish Beach Music Festival Announced