A Recap of the 2019 Big Sky Music Festival

July 20th, 2019 marked the inaugural Big Sky Music Festival. It was a day filled with the sounds of great fantastic classic country music, vintage cars, and incredible artisan vendors. It was a scorcher of a day, but that didn’t stop the fun!

In the days leading up to the 2019 Big Sky Music Festival, the headlining act Alabama had to cancel their performance due to medical reasons. It was a shock to learn that the team at Republic Live were able to book the legendary country duo Big & Rich as a replacement. Not exactly the same vibe as Alabama, but equally iconic. And at such short notice, it was appreciated by many of the attendees. Alabama also had to cancel their show in Ottawa the night before Big Sky for the same reason. The good folks at Republic Live announced that anyone with Alabama tickets for the Ottawa show could attend Big Sky Music Festival free of charge. Always a successful PR move!

From there, it was looking like everything was going to go smoothly. Then the morning of the festival, it was announced that Diamond Rio had to cancel their performance due to “unforeseen transportation issues,” according to the band. It’s rumoured that the tour bus broke down. With such short notice, it was looking like there was simply going to be a change in the lineup schedule.

The day started with The Redhill Valleys kicking off the festival. They hit the stage at 2pm, right when the day was at its hottest! Truly, we’ve never attended a festival when it was that hot. The sun was beating down, and the humidity made it feel like the temperature was in the mid 40s. But that didn’t stop the fun! The Redhill Valleys put on a fantastic show and were the perfect start to a gorgeous day.

Next up was Canadian country legend Jason McCoy. Going to a Jason McCoy show never disappoints. He’s so personable onstage, and has a bigger-than-life stage presence that he always has the crowd laughing and having a good time. You can tell that Jason truly enjoys being on a stage. His band also had a lot of familiar faces to Canadian country music fans. Shane and Stacey from the The Western Swing Authority were up there. So was Chris Byrne from Jason’s band The Road Hammers. It was a great show, not even the heat could stop Mr. McCoy from putting on a great show! 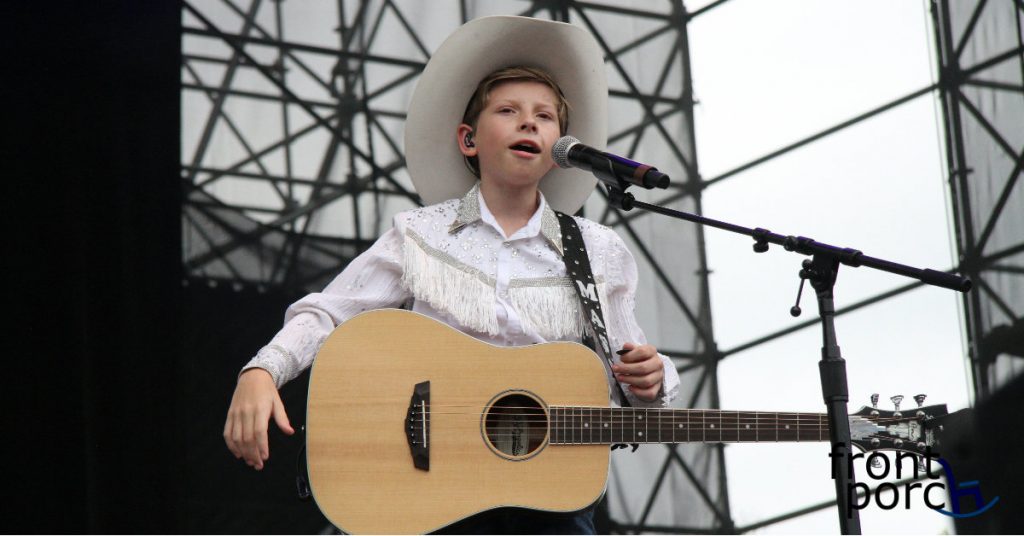 You remember that viral video of the kid yodelling in Walmart? Well, since that video, Mason Ramsey has rocketed to fame with a record deal and a touring schedule that has him going around North America performing for some of the biggest crowds. Seeing him live made it clear why this kid is doing so well. When his name was announced, out walks this little nugget of a kid with a guitar that is almost the same size as he is. He greets the crowd with a simple “what’s up?” and the crowd goes bananas! Then he opens his mouth, strums the guitar, and the sound that comes from Mason’s lungs was unreal. It’s obvious why Mason is seeing some extreme success. If you thought Mason was a one-hit viral wonder, you are very mistaken. He is going to do great things.

At 2pm, Big Sky was happy to announce that Canadian country artist Tim Hicks would be filling in and performing an acoustic set. This was nothing short of a miracle in our eyes. The stars aligned perfectly in order to pull this off. Tim happened to be an hour north at his family’s cottage fishing when he got a call from Republic Live. Long story short, a couple hours later, Tim was able to rally a few members of his band and he was playing an acoustic set to thousands of fans. It was actually really special.

Tim Hicks always puts on a rowdy show, so it was nice to see his set a little stripped down – but we assure you, it still got a little rowdy! Tim truly saved the day. Many people attending the festival were disappointed that Diamond Rio and Alabama weren’t there, but appreciated they still got their fill of amazing country music.

Now was the time that everyone was waiting for. One of the biggest icons in classic country music Travis Tritt took the stage. The crowds were so excited to see this iconic artist up on the stage. we were all very excited that he was actually there! Especially since he was the only classic country headliner that didn’t cancel. He brought some of our favourite country songs to life. His set was perfect to sit in the grass, enjoy a cold brew, and get lost in the legendary performance of Travis Tritt. This performance goes down in the books as one of the most memorable shows we’ve seen. Definitely a tick off the bucket list.

Now was the time to start partying! The sun went down and the drinks came out. Big & Rich hit the stage in the best way possible. The lights came up and the first thing we saw was Big Kenny and his iconic hat, followed closely by John Rich and his unmistakable voice. These two are an absolute joy to watch on stage. They know how to work the stage, work the crowd, and start a party. They played all their biggest hits, and even played some old classic country and classic rock. The crowd couldn’t have asked for a better band to fill in for Alabama.

At one point, they invited a couple up from the crowd and got the whole crowd to sing them an anniversary song. They have been married for 35 years – they got the chance to dance, and celebrate their anniversary with thousands of other people! Not long after that, they spotted a young girl named Samara in the front row who was celebrating her birthday. They brought her up on the stage and got everyone again, to sing “Happy Birthday”. It was a special moment for this young girl. She had the biggest smile on her face.

They closed the show off with their biggest song “Save a Horse Ride a Cowboy” and a medley of other songs. It truly was a great night.

Despite the disappointing cancellations, Big Sky Music Festival was a booming success! It wasn’t just the music. The classic cars, the artisan vendors, and the overall atmosphere was truly something spectacular. For a first-year festival there are no complaints. Even the artist cancellations didn’t feel like a big deal – and they were out of the hands of the festival organizers.

Big Sky Music festival may take place at Burl’s Creek, but is a totally different atmosphere and vibe to Boots & Hearts. It’s much more relaxed, not as many people, and overall much more friendly to country fans of all ages. Don’t get us wrong – Boots & Hearts is an incredible time! It’s the biggest party of the year. But Big Sky is a great relaxing weekend. It’s back to the classics at Big Sky Music Festival.

It was announced that Big Sky Music Festival will be returning for a second year on July 17-18, 2020. We can’t wait to see you there!

The Reklaws Break Records With Single “What The Truck” With Sacha

Lineup For The Road Back To Cavendish Beach Music Festival Announced